Once upon a time, there lived three little Dutch girls in the suburban city of Brampton, Ontario. When it came time for them to go and seek out their fortunes, they became singers.

How do you get to the top or compete with Premier Bill Davis for the Brampton immortality badge, with a name like the Hartzema sisters? A dilemma facing the girls over dinner one night in 1971, they began mulling over the situation. Betty (the youngest of the trio) had eaten peaches for breakfast – so came the name.

Shortly after dubbing themselves as The Peaches, the sisters Maria, Joanna & Betty achieved a fair measure of success. With the release of their single “Don’t Twist My Mind” by Robert Swerdlow, the trio went on to tell their story through country, rock, and Broadway showstoppers. So smooth, the work poured in.

Club engagements took them from a New Years Eve performance in the Imperial Room to La Combe in Edmonton. Soon becoming regulars at the Woodbine Inn, and playing shows in supper-clubs such as the Hook and Ladder, the Savarin and the Skyline, offering a relaxed brand of entertainment.

TV appearances began with a series of Ronnie Prophet shows on CBC in 1973. The Peaches impressed Elwood Glover so much he had them on his talk show series,  Luncheon Date, several times. The sisters have also appeared on Juliette, CTV’s Grand Old Country, as well as Global’s Everything Goes and Tommy Banks.

When not doing supper-clubs, TV, or making music, The Peaches participated in exhibitions conventions and tours. Gigs had taken them as far as Kamloops, Vancouver Island, Yellowknife, and Newfoundland among others.

On the stage, the girls are peaches and cream. Privately, they’re the same. Maria giggles a lot. Joanna is dimpled and demure. Betty strikes you as the business head. Collectively they became a recipe for success: 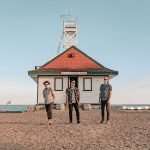