15-year-old Rochester, New York native Jack West, has already amassed career highlights, playing with Eddie Vedder in front of 30,000 fans and working with renowned producer Barrett Jones (Nirvana, Foo Fighters, Jawbox) for his debut album. The talented Cobain-esque rocker is often looked at as having an “old soul,” channeling the likes of The Doors, Bruce Springsteen, Neil Young, The Beatles, Pink Floyd among many others.

West’s latest single, “The Last Arcade,” is a stark contrast to his usual rock n’ roll style. It is a nod to an era that once was. Saying goodbye to the sound of the ’60s &’70s, Jack finds a way to revive the 1980’s synth-pop style while keeping relevant to today’s culture. New wave vibrancy blends with West’s smooth melancholy vocals to form a unique sound, highlighting the versatility of the young musician.

Having been written last October in Brooklyn, New York, the inspiration behind “The Last Arcade,” came by way of coincidence. “Myself and a few bandmates came across the last of 4 Killer Queen arcade machines on the planet,” says West. “One of those being two blocks down the street from where we spent time writing the track.”

Jack is a talent beyond his years and invites us all to take a sip from the fountain of youth while keeping alive a style of music whose days we thought were over.

Listen to the song below: 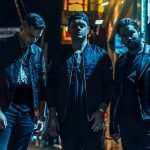