Since releasing their major-label debut album Splendor Solis in 1993, The Tea Party, composed of Jeff Martin (singer/guitarist/multi-instrumentalist), Jeff Burrows (drummer/percussionist), and Stuart Chatwood (bassist and multi-instrumentalist), have come to be regarded as one of the world’s most innovative rock bands, with a sound that incorporates everything from traditional instrumentation from around the world, to cutting-edge digital technology.

Over the past three decades, the trio has gained the attention of fans on a worldwide level, with record sales approaching 3 million units, receiving 14 JUNO Award nominations and 22 MuchMusic Award nominations, and touring around the globe. Now, after more than 30 years as a band, The Tea Party is ready to open a new chapter in its saga, a story that remains rooted in the goal to create new, ambitious, and thought-provoking music.

The band released their new EP Sunshower today, via Coalition Music  / Warner Music Canada on all streaming platforms. The 5-track collection of songs showcases the trio’s mastery of light and shade, and why they continue to occupy a unique place within the ever-changing musical landscape. Sunshower serves as a companion piece to the 2019 EP Black River. Together, the EPs will comprise the eventual full-length album Blood Moon Rising, officially marking the latest chapter in The Tea Party’s ongoing saga, which will be available only in Europe on November 26th. The Tea Party will also be releasing a brand-new CD Deluxe Edition and Remastered Vinyl Edition of their iconic first album The Tea Party on December 10th through Universal Music Canada, 30 years since its initial “indie” release.

Over the past three decades, the trio has gained the attention of fans on a worldwide level, with record sales approaching 3 million units, receiving 14 JUNO Award nominations, along with 22 MuchMusic Award nominations. Now, after more than 30 years as a band, what has the journey been like thus far? What is one memory that has stood out to you after all this time?

Stuart Chatwood (SC): “People ask us if we thought we’d make it to 30+ years, and to be honest, I’m not sure we did. We thought we had something special when we started otherwise I don’t think we would have put in the time and effort that it took to get us where we are, but 30 years was inconceivable when we started.”

“One memory that stands above the others was when we performed with AC/DC and The Rolling Stones in front of 490,000 people in Toronto. The crowd was a staggering size and we got to meet some of our heroes. In fact, I saved the day as Keith Richards tripped and fell on me as he came over to greet us. I got a unique view of the trinkets woven into his hair as I supported his full body weight.”

As the band prepares to open a new chapter in its saga, how have you found yourselves navigating and/or innovating the music scene of modern times as one whose sound incorporates traditional instrumentation from around the world?

SC: “We have had a history of incorporating instruments from around the world into our sound and it’s something our fans and ourselves as artists enjoy. Some people might see this as co-opting a culture but we see it as a form of inclusion and innovation. Exposing people to these instruments and cultures leads to a deeper understanding. We have a plethora of people that we have introduced to the Qawwali music of Pakistan via our appreciation of Nusrat Fateh Ali Khan. I also think of the great Afro-Rock musicians like Ali Farka Touré and King Sunny Adé amongst others who have used the American electric guitar extensively and how they have innovated and made beautiful music for us to appreciate. Myself, this journey led me to compose seven soundtracks in the video game series, ‘The Prince of Persia’ where I steeped myself in daily listening sessions of Iranian folk music before putting pen to paper.”

Serving as a companion piece to the band’s 2019 EP Black River, your 5- track collection Sunshower, is another stepping stone toward the eventual release of your full-length album, Blood Moon Rising. Explain the creative thought process behind this.

SC: “It’s no secret that it takes us quite a while to create full records, but we still love the 50-70 minute format of a record. Therefore, it was our intent to focus on a core of 5 or 6 songs for each EP with the master plan of combining them into a full album. We had to keep the sound and vibe in a similar vein for the record to have the same cohesion that the other records in our catalogue have so it was a bit of a challenge on that front.”

The EP includes the opening track “Summertime,” about enjoying the season with friends and favourite sounds. Following is the track “Hole in My Heart,” featuring a guest appearance from Todd Kerns. “Our Love” finds The Tea Party displaying the dynamic grandeur that has always been one of the band’s trademarks, setting the stage for Sunshower’s nod to vintage folk-rock, and “The Beautiful,” an unabashed love story that further reflects the band’s underrated melodic skills. How is the record telling of the beautiful dichotomy between light and shade found within your music?

SC: “Simply put, it reflects us as individuals who possess multiple traits and moods. We’re complex individuals and to have the music reflect only the deep, dark side of us might in some ways be disingenuous.”

What do you make of the resilience of the band after all these years? What is your greatest hope as a band, and for your fans, in the years ahead?

SC: “The true secret to our longevity is our approach to our relationship. We have a distant brotherhood. We love and care for one another, but we don’t get into each other’s business. We were friends before the band existed and I think that’s important, as some bands were assembled by producers and many other bands come together from ads in a newspaper/forum.”

“My greatest hope as a band is to keep the flame of creativity alive, and on occasion, eclipse some of the work from our halcyon days.”

Connect With The Tea Party: 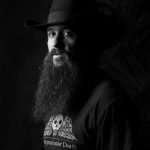