For most people, the first heartbreak can feel never-ending and dramatic. In Josephine’s debut single, “One Tomorrow at a Time,” she opens up about the pain of losing someone she couldn’t imagine a day without.

Her single is a guitar-led ballad about resenting how brutally we turn from lovers to strangers. The feeling of being in love can be blinding; it’s hard to understand how someone can love you one day and pretend you don’t exist the next.

From a young age, Josephine was always expressing herself through music and songwriting. Although at the time, most of her songs consisted of fairies, her passion for songwriting had begun.

“I’ve been writing since I was very young, putting into music about anything that sparked my attention. Writing has always been my way to go about the world and make sense of emotions. So when experiencing the heartbreak mentioned in ‘One Tomorrow at a Time’, I did what I know best and wrote a song.”

Josephine uses her experience and turns it into a song everyone can relate to.

“I think my writing is so honest because it’s like a page torn out of my diary in that sense.”

The opening lyric of her single, “I don’t hate you, I swear I’ve tried to, I just hate every bit of myself that still loves you,” is an experience most people can relate to. The organic honesty in her lyrics is what makes the song so enjoyable.

Genais writes from the raw and troubled perspective of one trying to navigate their emotions through heartbreak. She is asking this other person to help her step into this new reality where they are not there. To part ways slowly, one day at a time, one tomorrow at a time.

There is always that one person we want to hate but can’t. Even when we know we deserve better and tell ourselves we are “done,” there is still that lingering feeling of wanting to get back together. Like her lyric says, “I can’t chase you; I’m done fighting; I’ve tried running but it’s always back to you.”

The young artist’s debut single was released on all platforms on March 26th and was followed by a music video with videography by Lison Gachon. 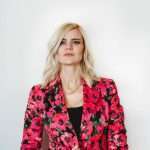 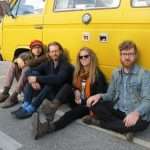