Like many of us, Colorado Americana musician Emily Scott Robinson felt lost while in pursuit of her calling throughout her teenage years and early 20s. Afraid of pursuing everything a music career entailed: quitting her 9-to-5, putting herself out there, learning new tools, among other things, Robinson became consumed by fear. That was until she accepted her fears and embraced them for what they were. The joy and ecstasy that overcame her when walking out on stage and connecting with an audience, gave her a feeling of truth and power much larger than fear itself.

Looking to give of herself to the world in the best way she knows how, Emily’s first album in partnership with John Prine’s Oh Boy Records, beckons to those who are lost, lonely, and struggling, hoping to help listeners find their place and feel less alone.

Produced by Jason Richmond (The Avett Brothers, The Steep Canyon Rangers), American Siren showcases Robinson’s powerful storytelling abilities as she blends imagined characters with meaningful stories and people she’s encountered on her journey thus far. With hints of bluegrass, country, and folk, the eloquent collection of ten songs, take us for a deep dive into Robinson’s journey through music.

Robinson shares on the record,

“I think that the thread running through the album is those things that call to us, and how we can’t resist that call,” she says. “It’s about the siren songs that come up through our lives. It is bigger and riskier and more expansive than my last collection, it feels like I wrote some songs that I’m going to grow into as I continue to perform them. I actually cried after I finished every one of them. I was so relieved that I was able to write them. I carved out a little more of my own experiences into these songs. They’re excavating some deeper stuff than I’ve touched on before. I think they will have a healing quality for people who listen.”

Rooted in acoustic guitar strumming and picking, accompanied by a three-part female harmony, the album’s lead track “Old Gods,” sees Emily dream of a love close to her heart, as she questions the lighthearted spirits that may be out to fool her: “But are you a trick of the memory / That the old gods are playin’ on me?” Hoping one day her prayers are answered and true love finds its way home.

Sweet vocals accompanied by the lone sound of a piano, “Let ‘Em Burn” tells the confessional story of a southern wife, and mother of 3 who appears to have it all together and zipped up tight on the surface, with much left to be uncovered. White picket fence – the American dream is within reach. Though struggling to breathe while spending nights crying herself to sleep on the bathroom floor, it is not the end, rather just the beginning: “I’m on the edge of something wild / On the edge of something free.” Sometimes you have to break down before you can breakthrough: “If you don’t recognize me when I come back around / It’s ’cause all the things I thought I’d be / I let ’em all burn to the ground.”

Dedicated to her late cousin James, a veteran of the Afghanistan war, “Hometown Hero” tells of the angels and demons that waged war inside his head and the family he left behind. Moments of sorrow are accentuated by the banjo and mandolin sounds of Steep Canyon Rangers’ members Graham Sharp and Mike Guggino along with the hauntingly beautiful presence of fiddle.

Only in the darkness can you see the stars, and it is in our darkest teachings we are left with our greatest scars; without them, we may have not have ended up where we are now. “Every Day In Faith” explores the miracle of overcoming adversity, and having the courage to go the course: “If I’d seen the hills and valleys on the road / I might’ve never had the courage to pack my bags and go.” The bright organ and shadowy bass give the song a contrast that signifies dark and light coexist.

Traditionally acoustic, Robinson calls out to home on the closing track, “Old North State.” The Steep Canyon Rangers make quite the exit on the record with rustic fiddle, folky mandolin, and the twang of a banjo – ultimately getting back to the bluegrass-country foundation of the record.

For her fans and for herself, this revealing collection proves that heeding the call to make music was the right decision. “Ever since this dream was born, I don’t think it’s ever left my mind, I’ve worked toward it every day, even when I felt like I was stumbling in the dark. Now I can look back and see how beautifully it all knits together.” 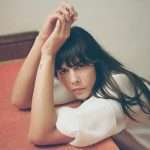