We connect best with music that provides us with a sense of familiarity. Sometimes we are lucky enough to experience a moment of clarity when our feelings of past events are accepted. After years of confusion and trying to come to terms with the dissolution of a meaningful relationship, 35-year-old Nashville singer/songwriter Madi Diaz completes her 11-track ANTI- debut, History of a Feeling.

Pulling from a range of folk, country, and pop leanings, heard are sonic influences ranging from Patty Griffin to PJ Harvey. Her strikingly honest lyrics are relatable to anyone who has experienced heartbreak and great change in some manner, and this sense of intimacy and camaraderie she seamlessly weaves into the songs was important to her. “I wanted it to sound conversational like I had just walked over to your house and we’re sitting and at the end of your driveway talking— just like we’re hashing it out in the same way that you’d call a best friend at one in the morning because you needed to talk about what just happened.”

When beginning to work on History of a Feeling three years ago, Madi had come to write over 100 songs. As she was selecting the songs for her album, she wanted a range of 11 tracks that best represented the tumultuous time in her life shaded by the relationship breakdown with her former partner transitioning, “The bulk of this music came from dealing with a kind of tsunami clash of compassion, both for my former partner while she was discovering a deeper part of her gender identity long hidden, and my own raw heartache over having lost the partner I knew. I felt so torn through the middle because half of me wanted to hold this person through such a major life event, one that is so beautiful and hard, and the other half felt lost—like I had lost myself in someone else’s story.”

As time slowed down, Madi was able to fully confront everything from her past, and “Rage” is a great introduction to the level of emotion she delivers throughout the album. The track gives off a sense of self-pity and anger towards a specific event or individual. It is clear that this album opens with this track to introduce Madi at her most angry self, “I wanna rage to erase everything.”

As an outlet to let out all the hurt she’s ignored for years, “Man in Me” is an open apology to her former partner, with lyrics like “I’m not proud of kicking in your bathroom door / Or screaming at you I don’t know you anymore.” Madi comes to realize her own mistakes and shows her feelings of regret, “I couldn’t take it back / I knew it back then like I know it now.” Madi shows her struggle with accepting an event she and her former partner experienced that changed their relationship forever.

And through Madi’s album, we are introduced to the range of emotions she experienced during difficult times. The track, “Resentment,” which Madi co-wrote with Wrable and Jamie Floyd, appears on Kesha’s 2020 LP. Madi has since done her own version which actually became the first song to make it on History of a Feeling. The lyrics describe Madi’s difficulty accepting that the person she fell in love with is no longer that person, “I don’t hate you, babe, it’s worse than that / Cause you hurt me and I don’t react / I’ve been building up this thing for months.”

During a time in her past when all Madi felt was confusion and loneliness, the track, “Think of Me,” tells of a time when everything is changing so rapidly and after the feeling of resentment towards her ex, came bitterness, “I hope you fuck her with your eyes closed / And think of me / I hope you love her with the lights low / And think of me.” As people experience the emotional rollercoaster Madi once lived through, many can resonate with the track because most of us have experienced some sort of heartbreak and bitterness towards an ex.

The track, “Nervous,” allows for listeners to experience that moment of clarity and acceptance. After expressing her first reaction to the heartbreak and the rollercoaster of emotions expressed throughout the album, “Nervous” is that track that provides a brief moment of clarity. Where Madi accepts her vices and how she contributed negatively to that period in her life.

Lastly, “New Person Old Place” is the perfect track to help wrap up Madi’s story. Some people, can look back at their past, relive those dark moments, and accept everything for how it is, “What used to hurt doesn’t hurt anymore / What used to work doesn’t work anymore.” The song resonates with many people who understand what it takes to move on from someone in their past who they didn’t see a future without.

History of a Feeling is an album that undeniably marks Madi’s status as a first-rate songwriter, and one wherein she establishes herself as an artist capable of distilling profound feelings with ease. These songs are the most direct and introspective songs Diaz has ever written as she tries to excavate that sense of familiarity you experience when someone breaks your heart, lies to you, or just says something that makes you feel a certain way you know you’ve felt before. “I’m always trying to slowly walk backward and figure out when the first time I ever felt that feeling was. There’s almost a wish that if you figure out where that feeling first came from, you can save yourself from repeating history.” 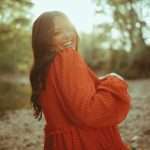