Award-winning Scottish-Canadian musician, David Leask wrote and performed his brand-new record, “Voyageur in Song” on Canada’s most historical instrument, built from over 64 pieces of natural, indigenous, oral, recorded, and contemporary history from each province and territory in Canada. These pieces include fragments of wood from one of Wayne Grezky’s hockey sticks, Canada’s Parliament, John Ware’s cabin, Nova Scotia’s Pier 21, Nancy Greene’s Olympic ski, and dozens more historical elements. The strap and case also contain numerous Canadian historical items, such as Col. Chris Hadfield’s mission patch, Karin Kain’s tutu, and pieces from Gord Downie’s final tour wardrobe.  The Six String Nation guitar, nicknamed “Voyageur”, carries with it the stories of the people and places throughout Canadian history, six of which are featured on Leask’s new record.

When asked to touch on any Scottish influences that may be present throughout the record, Leask had this to say: “Melodically speaking, I think there’s always going to be a mix of my Scottish influences whether traditional or contemporary, but now that I’ve lived in Canada longer than I have in Scotland, this may actually be the most Canadian record I’ve done!” David goes on to say…“it has expanded my sense of Canada’s diversity through the stories that make up this great country, and has given me a deeper sense of both the pain and the beauty that seem to be part of every story, most certainly the Canadian story.”

The opening track “Against the Grain,” is written about the spruce top on the guitar which was taken from the legendary albino sitka spruce tree known as Kiidk’yaas, or “The Golden Spruce”. A natural wonder, sacred to the Haida people, the tree was dealt a fatal cut by a misguided logging protester in 1997.

Track 2 “The Legend of Joe Labobe” tells the story of a local hero who was a Mi’kmaq fisherman from Lennox Island First Nation P.E.I. A two-time winner of the Canadian Oyster Shucking Championships in Tyne Valley, the handle of Labobe’s favourite shucking knife was used as the seat for the strap post in Voyageur.

“Fire & Ice”, the halfway point of the EP, imagines the birth of a billion-year-old piece of Labradorite from its own geological and mythical perspective. Glints of blue from the Labradorite can be seen on Voyageur’s 3rd and 9th frets.

A piece of wood used in four different places in both the interior and exterior of Voyageur is from a still sturdy grain elevator in Saskatchewan built by the Doukhobors. “Spirit Wrestlers” tells the story of this Christian pacifist sect from Russia who, after persecution by Tsar Nicholas, immigrated to Canada in 1899 with support from author Leo Tolstoy using the proceeds of his book, “Resurrection.”

The fifth track “Take A Seat” is titled after an original seat taken from the gallery section of Massey Hall, used for the headstock of Voyageur. Its presence continues to vibrate with the history and mystery of more than a century of music and more from the “Grand Old Lady of Shuter Street” in downtown Toronto.

Closing out the record is “Les Chansons Du Voyageur”, a reminder that every encounter a musician has with an instrument is an invitation to discover its secrets and to reveal its true voice. This song is a journey of discovery and a tribute to the guitar and its diverse pieces of Canadian history.  During the song’s recording, Voyageur was the only instrument used along with David’s vocals.

Leask feels the defining characteristic of this project revolved around the incredibly powerful experience of writing on and with Voyageur. “I tried to think of this as not just a musical instrument but as a group of living stories,” explains Leask. “As a songwriter, I am a strong believer that I don’t just write the song but to some extent, the song writes me.” A notion Leask touches on in “Les Chansons Du Voyageur,” about the “storying guitar.” A process described as translating stories hidden within the guitar into a musical language. “When I picked up the guitar, there was a reverence for it, in that whatever idea came out, whatever the voice and melody, I would not deny its opportunity to be heard in a song. It wasn’t me sitting jamming, it was me revering those voices and through my filters, craft, and perseverance, letting Voyageur sing out in a song. It felt sacred.”

Like many artists, David had his doubts about being able to do each piece and story justice. But, through this experience, he was able to discover new musical territory. On his songwriting expedition, David was pulled in different directions tapping into a deeper intuition of how and where he might go to represent the story. Whether it be writing “Fire & Ice” in 5/4 time, unusual chord changes in “Against The Grain” or the repetitive chant-like nature of “Les Chansons Du Voyageur,” David gracefully honoured each historical element in its own way. “Working with Voyageur has brought to life how important it is to listen to the voices and stories within ourselves and all around us as they find expression,” explains David.

Leask hopes when reading the stories behind the songs and connecting them with the origins of each piece, fans and new listeners alike will see the opportunity to find something in their own story that resonates and makes them feel closer to Canada. “I hope that perhaps they may even feel inspired to do something themselves creatively to express their own story,” says Leask. “Whether in some form of art or just in the telling to the people they love.” Ultimately helping one gain a better understanding of who they are.

Much like a bird in flight, Leask took the project by the horns and expanded his wings. Proving that with enough creative expression, one can accomplish what they may never have thought was possible. A record that plays out like a history lesson, sit back and enjoy the wondrous elements that make Canada the great country it is today!

Stay connected with David for updates on future releases: 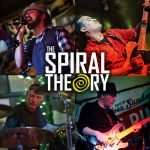